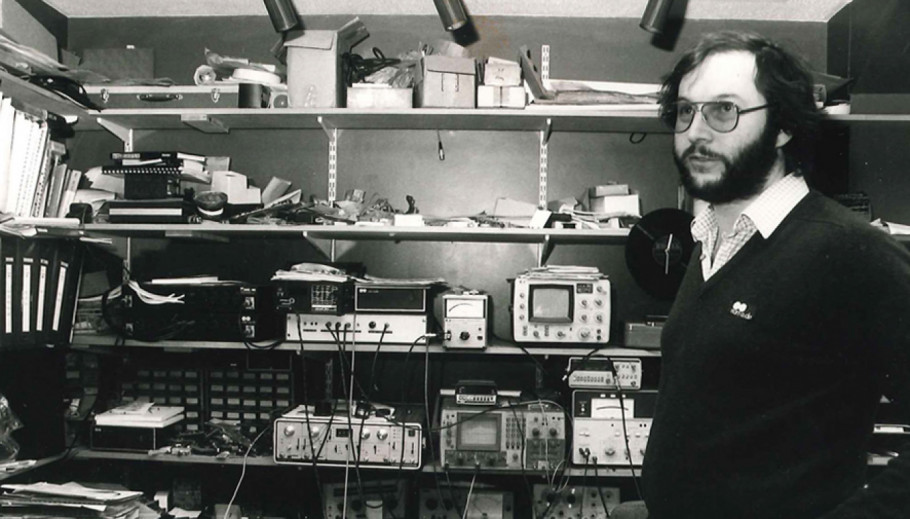 Our story begins with one man’s passion for music and weaves its way through four decades and a raft of iconic product launches to the present day.

Naim Audio founder Julian Vereker MBE (1945-2000) was a racing car driver, entrepreneur and self-taught engineer with a deep passion for music. Spending his spare time listening to and recording his friends playing live in the 1960s, Julian found that playback on his system at home fell woefully short of the experience he craved.

Not content with second best he decided to design his own amplifiers and loudspeakers, ignoring accepted wisdom and focusing on aspects of performance that made music burst to life. These first designs laid the foundations for a range of iconic and award-winning hi-fi products that would reach well into the next century.

Frustrated with the quality of music reproduction after recording his friends playing live, Naim Audio’s founder, Julian Vereker turned from building his own racing cars to experimenting with amplifiers.

1972 A first start at Capital Radio

Julian won a contract to supply then start-up radio station, Capital Radio, with audio equipment. The successful design was a compact version of an early Naim Audio power amplifier combined with speaker drive units in one cabinet – the NAM 502.

Following the success of Capital Radio, Naim Audio was officially incorporated in 1973 with Julian Vereker and his co-founder Shirley Clarke as directors. Based in a shop in the centre of Salisbury, our first HQ had both manufacturing and demonstration facilities.

With a network of dedicated independent retailers now on board in the UK, the NAC 12, our first production preamplifier, was launched.

As Naim Audio grew in popularity through the 70s and early 80s, the team decided to grab the attention of the press and public with a series of tongue-in-cheek adverts. They reflected the confident, often unorthodox nature of our approach to music playback and have become iconic in their own right.

Julian joins friend and fellow inventor Andrew Ritchie at his newly founded company. Their product is an innovative bicycle which can be quickly and easily folded up for transportation and storage. He backs the business and becomes a Director, helping them to set up production and eventually to become one of the most iconic British brands in the world: Brompton Bicycle.

Naim Audio is recognised with the prestigious Queen’s Award for the first time in 1985. We would go on to repeat this achievement a further two times in the 21st century, winning for Export in 2010 and for Innovation in digital music streaming in 2014.

Like so many Naim Audio products, the design of our first CD player, the CDS, flew in the face of conventional wisdom. Its Two-box configuration gave the power supply its own separate enclosure and the CD clamp used a rare earth magnet to keep its mass low whilst still firmly holding the disc without vibration.

Created by Naim founder Julian Vereker, Naim Records combined his love for music with his quest to deliver the best sound quality, from the studio to the listening room.

The year 2000 marked a step change in Naim Audio history. After several years in development, the new flagship Naim Audio NAP 500 power amplifier was born and with it the new industrial design aesthetic that would redefine Naim Audio for the 21st century. Its music-making ability would only be bettered by the arrival of Statement in 2014.

Two brands with a distinguished British heritage and a passion for engineering excellence share an 18 month development project to produce the Naim for Bentley in-car system. Using sophisticated Naim Audio DSP (Digital Signal Processing) and speaker drive unit technology, the system is available as a custom extra on all Bentley models.

An all-in-one player which combines the new world of music streaming with a CD player and integrated amplifier inspired by the original NAIT is launched. The NaimUniti won a coveted What Hi-Fi Product of the Year award in 2009 and in 2012.

We celebrated our 40th anniversary in true Naim Audio style with live music from Naim Records acts at the Salisbury Arts Centre, just a stones-throw from where it all started at our first HQ on Salt Lane in the centre of town.

Crafted for pure musical performance, 2014 saw the pinnacle of Naim’s engineering knowledge and artistry in the arrival of Statement. The groundbreaking series comprises the NAC S1 preamplifier and NAP S1 mono power amplifier.
Conceived over a decade ago, with development from 2011, the objective was to set a new reference standard in high-end audio and music reproduction and aesthetics; a new page in the Naim Audio story.

Naim Audio launches its first complete wireless music system, Mu-so, offering real versatility and performance alongside multiroom capability, a new landmark in high fidelity digital music. Mu-so is driven by a powerful digital brain and fitted with custom-designed speakers for a musical experience that has to be heard to be believed.

Naim engineers across all disciplines – electronic, industrial, acoustic, mechanical, and software – worked for three years to create a new music streaming platform. The powerful platform makes the most of online services such as TIDAL and Spotify while adding future-proof flexibility. It has featured in every connected Naim product since.

Updated with the new music streaming platform and a stunning design makeover, the next-generation Uniti players included the compact Uniti Atom, the CD-playing Uniti Star and the powerful Uniti Nova, plus the CD-ripping Uniti Core music server. First to launch, the Uniti Atom won two What Hi-Fi Awards by year end – as is unbeaten ever since.

Our latest partnership saw us collaborate with another company famed for its British craftsmanship and quality: Princess Yachts. Together we’ve recreated the Naim sound in the unique marine environment, carefully positioning drivers, concealing subwoofers in the furniture and optimising the right musical focus for both enclosed and open-air zones.

Quite simply the best source component we have ever developed, the ND 555 network player marries the new music streaming platform with classic Naim analogue technology – each element uniquely isolated by exceptional engineering, including an internal Faraday cage. The ND 555 has set new standards in musical performance and has won global acclaim.