The brand Advance Acoustic - created in 1995 – is owned by ADVANCE PARIS. Our company occupies modern offices, about twenty kilometres from Paris, between Roissy Charles De Gaulle airport and Orly airport. Our team in France is made up of people with a common purpose of excellence. Research and development, administration, logistics, after-sales and marketing services are there to meet your every need.

From the beginning till today

The decision to create a new French name for Hi-Fi sound reproduction was made in Toulouse in 1995. The starting idea was both simple and audacious: to design sound equipment, reasonably priced but with faultless musical quality.

To begin with, Advance Acoustic developed a series of loudspeakers, in five different models, in order to offer an interesting choice to music lovers, and having in common an exceptional price/quality ratio.

The success was immediate among retailers. All the models were highly praised in numerous specialized magazines in France.

In 1997, one model even received the acclaim of best “value for money” on the market from Hi-Fi Magazine.

From the beginning of 2000 the advent of Home Cinema led us to complete our range of products with specific models, front central speakers, back surround speakers and subwoofers.

2002 was for us the second key-date. At the same time as the release of acoustic speakers, we decided to add a range of electronics to the Advance Acoustic products. Of course, this range is intended to follow the same philosophy as our successful range of speakers: unbeatable value for money ratio.

From its launch, in 2003, the first integrated amplifier of the brand was exceptionally successful, and received numerous awards from specialized magazines.

In September 2005, we decided to export the Advance Acoustic range by introducing our products at the largest European trade fair, the IFA show in Berlin.

The interest which our products received from the distributors in different countries was amazing and beyond all our hopes. Today, we export the Advance Acoustic range to around forty countries.

Since September 2008, we have released a new range of speakers, the Elysée series, for which we have designed our own drivers with exclusive integrated BSW system.
This new range fast became a leader among retailers and professionals worldwide.

2009 - 2010: Advance Acoustic is set to surprise you once again. On the one hand, it will offer a wider range of products to better satisfy individual requirements. It will also mark the birth of a very ambitious project, namely to produce, in limited quantity, the different components which we have developed in our laboratory and are used as reference for the development of every product in the range. By this, we mean: the 400 watt mono amplifier (MAA 1000), the double mono pre-amplifier (MPP 1000) and the four-way loudspeaker equipped with a 31 centimetre bass driver (EL 1000).

Since the creation of Advance Acoustic, we have developed, designed and perfected the whole range, in our laboratory near Paris. We buy direct the best components of current technology.

The final assembly of components is carried out in several worldwide plants, under the constant supervision of our engineers to guarantee the fairest possible retail price. This method of control enables us to be on offer and approved in the majority of countries worldwide. 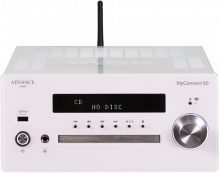